We don’t usually drive the RV  on long trips in the winter. In the past we have stuck close to Florida, where warm, sunny days are the norm in January and February, and there is no shortage of things to do. Nothing is worse than trying to steer a 33 foot motorhome through snow or ice storms. But a trip down the Baja in Mexico beckoned and it meant we had to be in San Diego in early February, so we headed west right after the new year. We allowed plenty of time for seeing what we could see as we crossed the southern states. New Orleans proved to be a cold, rainy bust. We left early, promising to return, and hoped for better weather in San Antonio for a tour of the Mission Trail, our next big stop.

East of Houston was cold, with a lot of rain and sleet. We stopped for the night and the weather was the talk of the campground. Ice and snow had closed the roads heading west, so a number of our neighbors had been there for a day or two, waiting the storm out. By morning we had continuing rain, but no ice. I-10 had reopened and we made it past Houston to to San Antonio without a problem. Our first order of business was to find  a local Mexican restaurant, Don Pedro’s, and have a great Mexican meal. One of the treats of traveling the southwest is Mexican food that is much better than the pseudo chains we are used to. I don’t understand why anyone in the Southwest (or anywhere else for that matter) eats at Taco Bell. 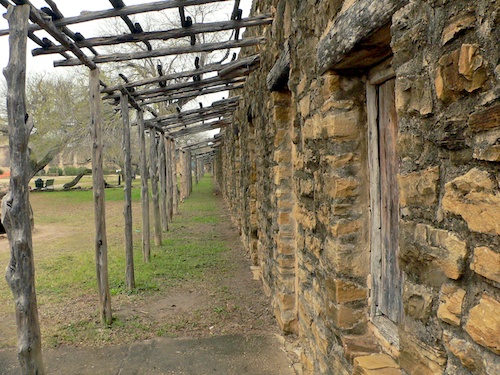 The morning dawned cold and drizzly but we were on a mission to see the the Mission Trail so weather was not going to get in the way.  In the early 18th century the  Spanish empire had set up five missions along the San Antonio River, primarily to expand their influence north of Mexico but also to convert the native population. Run by the Franciscans, they converted the Indians, taught them to farm and fought off the Indians that resisted. We toured two missions, drove by the third because it was raining so hard and found the fourth locked up, but guarded by a sweet looking steer. The fifth mission, the Alamo, would get a separate visit. We enjoyed these missions, their architecture and their history. It was an ironic reminder that the border between the United States and Mexico has been a moving target over the centuries. We stood in what was once new Spain, then Mexico, and before  them indian territory. 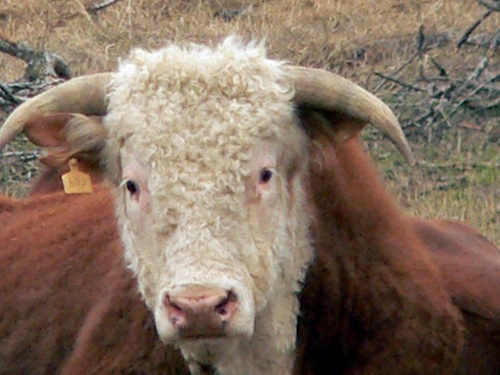 We are in Texas after all