Searching for a Cocktail in Rockport, Massachusetts

Driving the RV north along the coast towards Maine, we had just passed the Boston area and decided to get off the road early and explore the Gloucester and Cape Ann area. We’d always heard Cape Ann billed as the other “Cape” so we decided to find out how like Cape Cod it really was.  We hit Gloucester first. It is an old fishing town that unfortunately has grown into suburban sprawl, so we pretty much just drove through and headed to Cape Ann peninsula.

While it is considerably smaller than Cape Cod, and only has one town, Rockport, at its tip,  it was a scenic drive down this spit of land surrounded on three sides by the Atlantic Ocean. Pretty, well manicured homes, and lots of greeney lined the roads into Rockport. It started to rain heavily as we came into the town so we drove around for a while, waiting out the storm and getting oriented. Along the coast, rocky beaches and seaside parks could be seen, between sweeps of the wipers. The town itself was lined with lots of narrow streets, quaint old homes, artist studios and B and B’s. The rain let up and we wandered the streets of this seaport community, now converted into an artsy tourist destination. The dock area and harbor offered pretty (but foggy) scenery as well.

There were lots of shops and galleries to poke around in, but even on a good day hubby has limited patience with browsing, and it was getting near cocktail time, so we went in search of a bar and someplace to have dinner. There was no shortage of restaurants, from seafood to pizza, upscale to take out. What we couldn’t find was a bar. We finally stopped in a art gallery and asked where we might get a drink. The response was not what we expected: the town of Rockport did not have a bar.

Lots of places to shop

Our well informed friend explained that in 1856  200 women swept through the town in what he called a “rum revolt.” They destroyed anything containing alcohol and since then liquor had been banned from town. Now if this was Utah I could understand it. But Massachusetts?  My Irish friends from Boston were no strangers to alcohol. Hubby and I looked at each other with disbelief, just our luck to visit one of the few dry towns in the state. But all was not lost. The gallery owner told us that even though there were no bars, and liquor stores were still illegal, the town had recently relented and let restaurants start to serve alcohol.

We left the Gallery with a recommendation of  The Fish Shack as a great place for fresh seafood. We had a pleasant meal overlooking still foggy Ipswich Bay, the scallops made all the more pleasant by the accompanying glasses of wine. 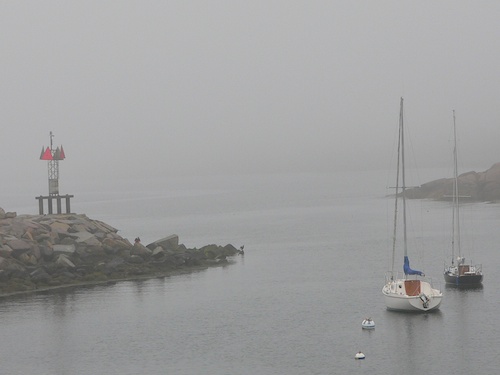 The ocean is somewhere out there