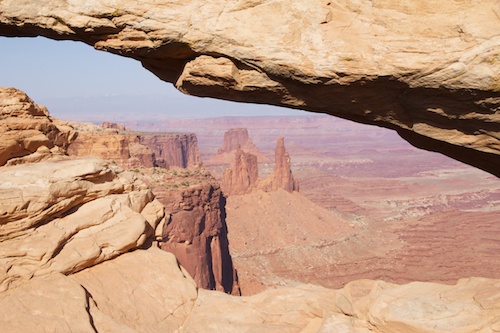 Utah has it all. Deserts, mountains, forests, canyons, rivers, world class skiing, the Sundance film festival, the Morman Tabernacle,  widely varying and often incomprehensible liquor laws (see the Morman’s about that).  Last time through we visited Zion and Bryce National Parks, Glen Canyon National Recreation Area and Grand Staircase-Escalante National Monument (between all these parks and monuments and recreation areas the Federal Government owns about 60 % of Utah, but don’t bring that up with some Utahans.)  Back then we were planing on seeing Arches and Canyonlands National Parks as well, but it was 110 degrees in Moab,  so we headed north to the cooler mountains of Wyoming and Montana instead.

This time we were smart and planned our visit for May, and it has been much cooler (85-90 degrees midday.) Moab is a nice town on the Colorado River, surrounded by red canyon walls, with about 5,000 people living off the tourists and offering “adventure.” You can run a river, sky dive, take extreme off-road jeep excursions, scale the walls of a canyon, or, like us, attend the Moab Arts festival. It was not overly crazy given the holiday weekend and we  spent most of time exploring Arches National Park, Canyonlands National park and the surrounding areas.

The wind has been really blowing on this whole trip and it reached its peak when we drove up to Canyonlands to catch  the sunset over the Green River. Driving the  roads that climb up the plateau we were buffeted left and right, and we had to hold on for dear life at the viewing points. The air swirled with red dust, making the views hazy at best and it coated us with a fine layer of dry grit. We left before the sunset and headed back to the RV for a shower. We did manage to simultaneously watch the sunset (uninspiring) and the full moon rise (awesome) in Arches Park the next night.

We left the red rocks area for Vernal, Utah and Dinosaur National Park. It is not that far, but the terrain went from red rock to white and pink sandy slopes to boring grassy hills back to colorful buttes and mesas as we approached Vernal. We had consulted our Western Mountain Guide before choosing our route, since Hubby hates steep grades with sharp drop offs, and this book is our bible when it comes to staying off roads we shouldn’t be on. The author is thorough is his descriptions of grades, curves and potential pitfalls for trucks and RVs. Well, we ended up on this road climbing a 9 % grade for four or five miles, emergency blinkers on, easing around 15 MPH curves. As Hubby said, he’d rather be climbing a 9 % grade than driving down one.  We went over the 9000 foot summit and the descent was much more gradual. We felt sorry for those heading south who had to go down that steep grade. We had a quiet Sunday afternoon in Vernal and on Memorial Day toured the Quarry at Dinosaur National Monument. What can I say. I enjoyed looking at billion year old bones almost as much as I like all the rocks.

Hubby has had enough of both rocks and bones and is itching to fish, so we are heading off the grid to a lake in western Utah for four or five days. I’ll be catching up on my reading and relaxing until we head up to Teton and Yellowstone. See you when we return to the digital world.