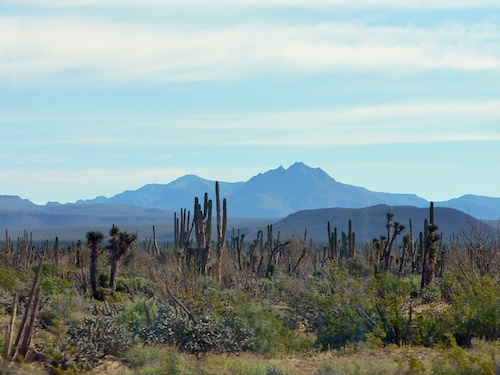 On the road from Guerrero Negro

It was dark and foggy as we lined up at 7 am to leave Guerrero Negro.  These early starts don’t leave any time for our usual morning walks. Combine that with all the Mexican meals we are eating and it doesn’t portend well for maintaining the girlish figure. As the caravan started to pull out of camp, Hubby noticed the wheels were locked on the tow vehicle of the RV ahead of us. He called them on the CB and they had to stop to check it out. It usually means the tow vehicle wasn’t connected properly.  This is Jerry and Irene, the same couple that got lost as we crossed the border into Mexico and went back into the US to start over. They have a brand new RV and this is their first trip. We were all held up for about 10 minutes while they reconnected the tow car and the front half of the caravan was long gone. It was slow going in the fog, but eventually it lifted and we caught up with the others and got back on track. 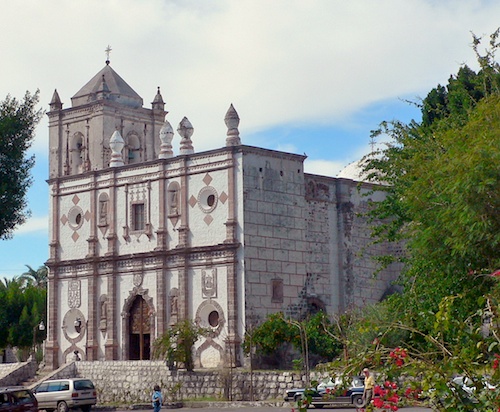 We stopped in the town of San Ignacio for an hour or so. With the free time some ate lunch and relaxed, I joined a few others in touring the town, and its famous church. The infamous Jerry an Irene missed a turn as they pulled into the camp where we were parking, hit a branch, and tore off their awning bracket. A number of people spent their free time helping them get it fixed.  As we are leaving Jerry and Irene also managed to pull down an overhanging wire. We had to stop and make sure there was no damage before we finally got on the road again. Jerry and Irene are having a tough trip so far. 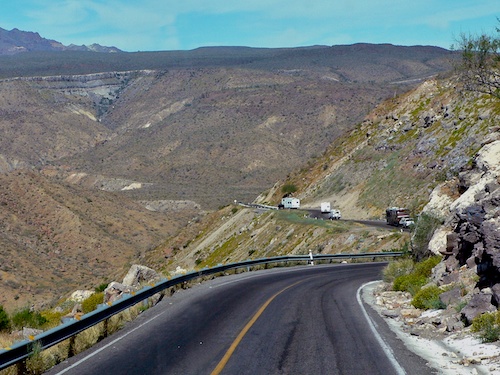 We climbed in elevation as we headed east to the Gulf coast. We passed Volcan las Tres Virgenes, an extinct volcano, and then we began to descend back down to sea level through Devils grade. Devils grade is the worst mountain section, a steep curving decline down off the mountains to the Sea of Cortez. The descent was made scarier when we had to pass an 18-wheeler coming up the grade. The caravan leaders kept us posted via CB radio about oncoming traffic so we could slow down (or stop) and give them room to pass. There were a number of crosses on the side of the road marking spots where others failed to make it. Hubby, who was either was so relaxed with his half a Zanax or totally getting used to this driving, said it wasn’t as bad as he expected. 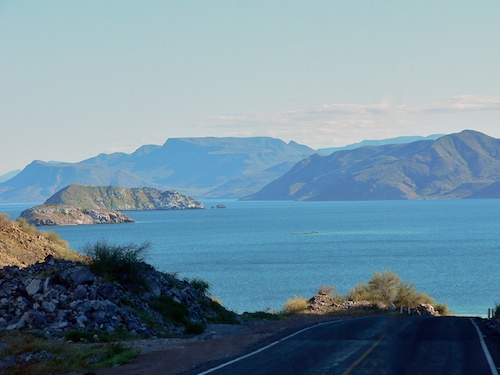 View from Devil’s grade of the Sea of Cortez

As we scattered along the roadside for a brief break near Santa Rosalita, our oil light came on. We were down a quart, so we added some oil and hoped there wasn’t a leak or some bigger problem.  Our camp for the night was Playa Santispac.  The camp is right on the Bahia Conception and is a beautiful place. It is dry camping, no water or electric hook-ups, so it doesn’t take us long to get settled. Despite the size of the camp Bill has us all parked tightly together in one section near the back. He explained it will be easier for us all to line up for our start in the morning if we are now spread out all over the place. We walked the beach, had some beers, talked to some of the others campers and chilled out until dinner. Some locals came through camp selling blankets, trinkets and fresh shrimp. This is a spot we would have liked to stay longer, but with the caravan we move on their schedule. We are told we stop here again on the way back.

Dawn on the Bahia Conception