Oh Well, Roll with the Punches 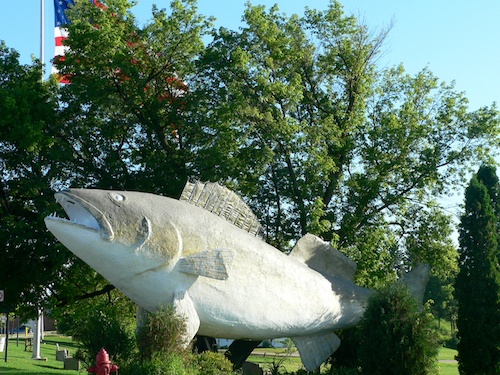 Hubby was born a fisherman. No one in his family fished, but from his earliest days it’s all he ever wanted to do. Maybe it’s that Manzanita Indian blood that courses through his veins, maybe it’s genetic. Who knows why we grow up loving one thing over another; another of life’s mysteries. But fish he does. He’s done it professionally and he’s done it for fun. With this passion has come an in depth knowledge of prime fishing locales across the country. I know because when we plan trips he makes sure that his secret hot spots are somehow included.

So, when we decided to tour the Great lakes and circle Lake Superior, he explained it would only be a short 200 mile detour to stop in Baudette, Minnisota and fish Lake of the Woods. This is the Walleye capital of the world and has great small mouth fishing as well. What more could an angler ask for? It worked for our trip plans because we would be on the Canadian border and could cross into Ontario, head back east toward Thunder Bay, pick up the northern coast of  Superior and continue on our Great lakes tour. So, why not?

The drive from where we had been on the U.P of Michigan and the Duluth area passed through some beautiful terrain as we neared International Falls. Superior National Forest and Voyageurs National Park were breathtaking and we only skirted the edges. Voyageurs and the Boundry Waters along the U.S. Canadian border are only accessible by boat. We made a note to come back with one. 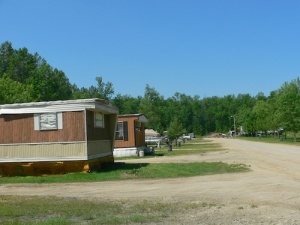 International Falls was not so scenic, very industrial and not a place to stay much past summer. It’s supposed to be the coldest place in the U.S., with long, bitter winters, 5 to 6 feet of snow and temperatures that stay well below zero. No thanks.

We drove along the Rainy River and an hour later we arrived in Baudette, greeted by Wally Walleye, the town mascot. Baudette is small but functional, catering to mostly fisherman and snowmobilers. Our camp, the Wigwam resort was on a pretty spot where the Rainy River meets the Lake of the Woods. The camp itself left a lot to be desired, with run down double wides and boats on trailers, lots of mosquitos and no internet. We were the only RVers. Oh well, roll with the punches. We were here to fish.

Back to the fishing. We drive all this way to fulfill hubby’s desire to fish this lake and we run into one road block after another. The camp no longer rents boats, we are going to have to find a guide to go fishing with. The wind is blowing hard and the lake has waves, so we will have to fish the Rainy River. Oh well, roll with the punches. We find a guide and get our licenses.  We had a great day fishing the River and caught lots of walleye and a few small mouths. The camp restaurant cooked up our fish for us and charged a dollar. With some sides our dinner bill was $6. Life is good. 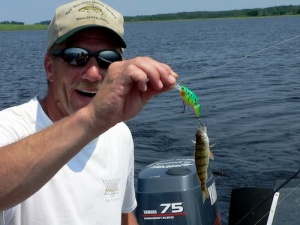 Catch of the Day? 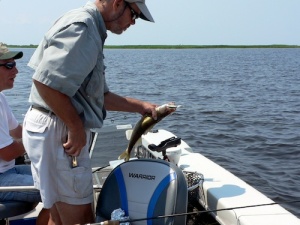 Another one bites the hook

The wind continued to blow and the Lake was not fishable. We took a ride to pick some fresh blueberries and were attacked by swarms of killer flies. The golf course only had nine holes open due to construction and you had to play around ditches and large equipment.  Baudette didn’t offer much in the way of diversions, so we decided to leave a few days early and move on. One of the benefits of red road travel. Oh well, roll with the punches.

Hubby’s dream of fishing Lake of the Woods didn’t quite turn out as envisioned, but we made the best of it.  On the positive side, what we did have was spectacular sunrises. I was out there on the shores of the Rainy River enjoying them most mornings, coffee and camera in hand. Here’s a few of them for you to enjoy too. 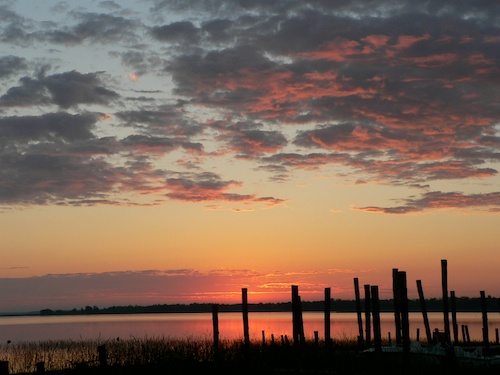 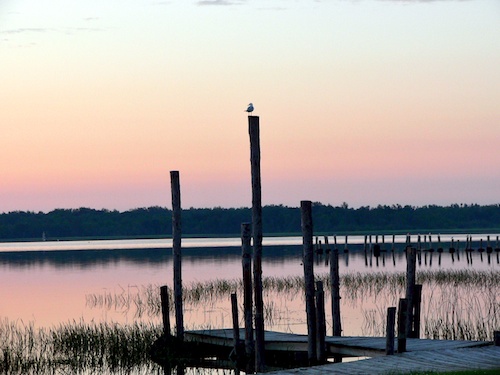 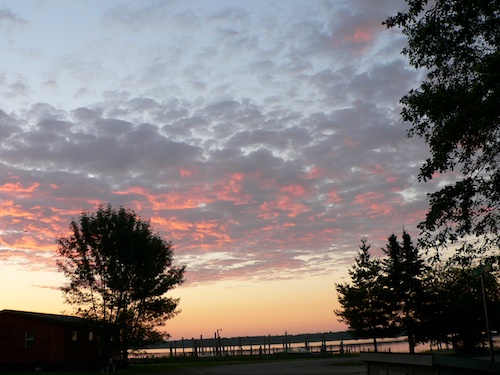