Can you see the sleeping giant?

We get back on track with our circle tour of the Great Lakes with our arrival in Thunder Bay, Ontario. It’s on the north shore of Lake Superior.  It’s an industrial looking city with huge grain storage facilities, docks, a confusing array of streets that change names every few blocks, old business mixed with new, signs everywhere, and lots of shopping centers.  I think, after our time camping in northern Minnesota and at Hubers fishing lodge in western Ontario, we need to get used to civilization again. It was a bit overwhelming at first.

We have seen Lake Superior from the southern shore at Whitefish Point in Michigan and again from Pictured Rocks National Seashore. We have seen it from the western side at the Apostle Islands and in Duluth. It hasn’t changed much. From the north it is still big and blue, more ocean-like then lake. We stopped in Thunder Bay so we could see Sleeping Giant Provincial Park. It is a large Park perched high on rugged granite cliffs jutting into Lake Superior on the tip of Sibley Peninsula, about 20 miles east of Thunder Bay. We could not get camping reservations in the park, so we stayed in a KOA in Thunder Bay. There is, I am sure, some First Nation story to go with the park, but basically it gets its name because from the west the outcropping of land looks like a giant lying on its back. Can you see him in the Photo? 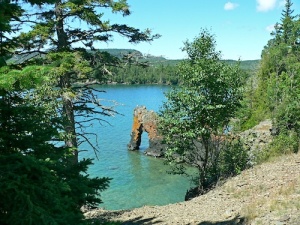 The park is full of  lakes and woods and hiking trails. We drove up a gravel road to Thunder Bay Outlook with its spectacular  views of Lake Superior and Thunder Bay. We fished for a while from the shore of Lake Marie Louise and after lunch, drove through the rest of the park to Silver Islet. The small island off the end of the peninsula once housed a productive silver mine in the late 1800’s. We poked around an old general store and took a hike up to Sea Lion Rock, a rock formation jutting out into the lake. I never quite understood the sea lion part, it doesn’t look like one to me. All in all a full and satisfying day enjoying one of Canada’s many provincial Parks. We will enjoy many of them on this trip. On our way home we even caught sight of a deer having an early dinner. I think we will follow suit. 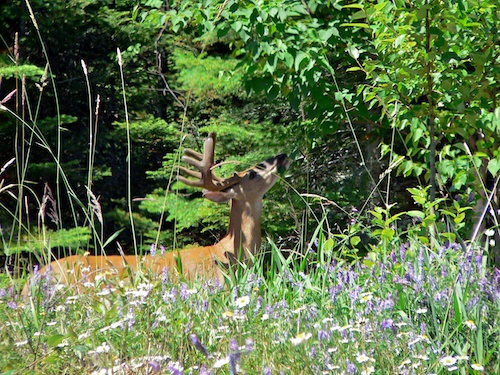