Back in the day, before we had our RV, when the idea traveling the Red Roads was just a faint germ of a possibility, we used to drive from Long Island to South Carolina on a regular basis.   No matter what time we left, or how we planned to drive around Washington DC and Northern Virginia, earlier, later, at midday or midnight, we hit traffic. Frustrated we got out our maps and looked for an alternative route. Our sanity depended upon it.

We found we could cut across New Jersey into Pennsylvania and in Harrisburg get on I81 through Virginia and then take I77 through the Carolinas to Columbia and finally, Charleston. If that all sounds like a lot of Interstate babble let me put it this way. Instead of crazed drivers and traffic in the Washington area we had the rolling farms of the Amish country, dotted with horse drawn carriages and plenty of great restaurants to stop in. We had the beauty of the Shenandoah Valley and the Appalachian Mountains. We had little stress, fewer truckers and no traffic jams. It took an hour or so longer but it was oh, so much more pleasant.

What we didn’t do was stop anywhere along the way to explore the area. We had a destination, Charleston, and we drove until we got there. Now we are are in the RV and traveling the slower, red roads. We still go the same general route when we are going north or south, but now we stop at all those places we used to blow by at 70 MPH.

The Blue Ridge Parkway runs 469 miles from the Great Smoky Mountain National Park, through the Appalachian Mountains and Shenandoah National Park to the Skyline Drive in Virginia.  No interchanges, stop signs or traffic signals. It’s a slow (45 MPH, tops) winding drive with spectacular views and lots of history. It is a great drive to take from end to end. It also has no services (like gas stations) and only nine campgrounds. None of the camps have RV hook ups and few of them will accommodate a bigger rig. There are also areas where the overpasses are not even 12 feet high, always a worry when you drive a tall vehicle. In addition, since we are talking about the middle of the Appalachian Mountains many of the approach roads are very steep and not recommended for RV travel. Not to be deterred from fully enjoying the Blue Ridge the approach we use is to find nice places just off an entry road and explore the Parkway with our tow vehicle.

For example, the Fancy Gap KOA is nice campground laid out on a hillside, with big sites and a stocked fishing pond, a nice place to spend a few days. The entrance to Blue Ridge Parkway is right there and it’s a short drive to Mabry Mill (the most photographed place on the Parkway I was told), Rocky Knob and Meadows of Dan. From Fancy Gap we moved north 120 miles to Natural Bridge, Virginia. From there we explored the Parkway in the Buena Vista area, saw the Natural Bridge rock formation, ate at the Pink Cadillac Diner and picked up home made sausage, fresh ham and pear butter at Layne’s market. He’s been there for 50 years and he makes most of what he sells.

When we tired of all the beautiful scenery we headed east, over the Blue Ridge Mountains, and follow the James River to Lynchburg to soak up some Civil War history at Appomattox National Historic Park. The park is nicely laid out, with restorations of many of the original buildings, including the McClean house where Lee surrended to Grant. One highlight of the visit was the time we spent with a Federal soldier from Pennsylvania who told the story of the final battle and the surrender. He was excellent in his eyewitness recounting of the events and even when asked questions he never stepped out of character. You can read the facts in a history book but having someone do a historical portrayal really makes it come alive. All this and we have encountered no traffic and still have lots to see. 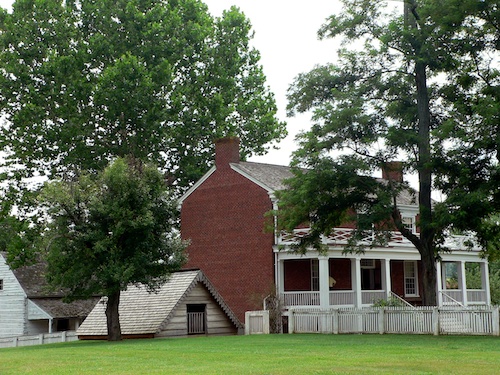 Next stop, a slow meander, paralleling the Blue Ridge on route 29, to Thomas Jefferson’s old stomping grounds in Charlottesville. To be continued…