An Early Peek at the Oregon Coast

We have been looking forward to getting into Oregon, since so many friends have said the coast (as well as the rest of the state,) is special. We were at the southernmost end of Washington, and it was a perfect spot for a day trip across the Columbia River to get a taste of the the  Oregon coast.  As usual, reading through all our travel guides and such there were many things to see along our route…Cannon Beach, Ecola State Park, Cape Meares lighthouse, Tillamook Creamery, the promenade at Seaside. Seeing the low-tide tidal pools at Canon beach was top on my list, and there was a super low tide around 7 AM.  The Long Beach Peninsula was socked in with a dense fog as we left the campground. As we crossed the Astoria Bridge, a old (and safe, we hoped) beauty that spans the Columbia river and heads us into Oregon, it still had not lifted. We figured we’d be seeing no magnificent vistas this morning and resigned ourselves to enjoying what we could see. We have learned on our travels that we can’t pick the weather, so roll with it. 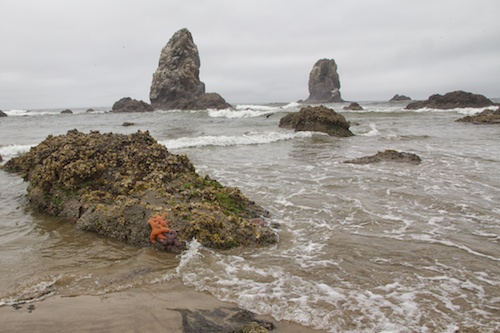 Canon Beach did not disappoint, even wrapped in fog it was beautiful. The iconic Haystack Rock loomed tall in the distance. At 8 AM there were crowds of people strolling the shore, inspecting the many starfish, and other sea creatures unveiled by the low tide. We happily joined them. 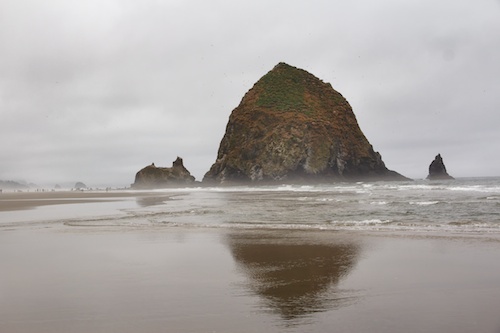 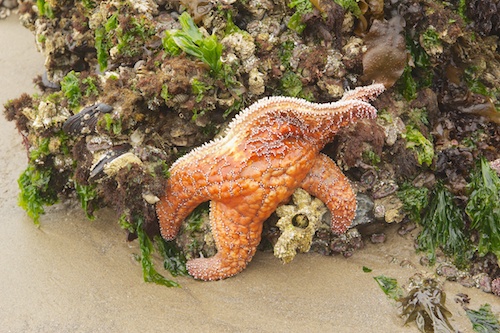 We spent the rest of the morning driving down the coast headed for Cape Meares lighthouse, stopping at overlooks and affirming we still couldn’t seen much because of the fog.  We did enjoy the inlets and small coastal towns we passed. We made the turn on the road leading to the lighthouse. Somehow we never saw the next turn we were to make and, lucky for us,  found ourselves heading toward the lighthouse on the longer side of the loop road. I say lucky because, besides seeing some pretty scenery, it took us past the road down into Oceanside.  This wasn’t on our “list” but we were hungry and it was the only town before the lighthouse. What a cute place it was, with all the houses built into the hill overlooking the ocean. “Downtown” was a half a block long.  We stopped at Rosanna’s Cafe, pretty much the only choice, and had the best meal of our trip. Overlooking the ocean, sipping some wine, enjoying our Cioppino, and smoked salmon baked in puff pastry, our waitress said we must have been lost to find Oceanside. She also told us the road we missed was closed, which is why we missed it. As I said, lucky us. 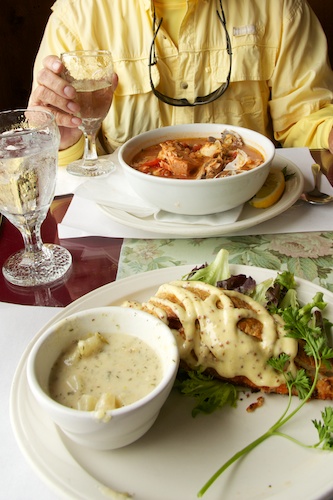 A fine meal at Rosanna’s Cafe in Oceanside

By the time we had found and seen the lighthouse it was near 3 PM and we headed back toward camp. We passed the Tillamook Creamery, but it was packed with people and we didn’t have the energy  to deal with it. The fog had lifted, so we were able to stop at those same overlooks and get a glimpse of what we had missed in the morning. As we crossed over the Astoria bridge back into Washington we realized, as usual, that we had not seen half of what was on our list, but had discovered and enjoyed a place that wasn’t. Not a bad day all in all. 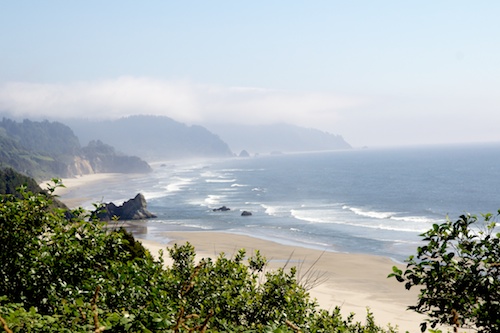 An unimpeded view up the coast of Oregon

Canon Beach from afar. The fog has lifted and the tide is in