At the Beach…Long Beach Peninsula, Washington

We began our re-entry from Canada into the U.S. on Washington’s Olympic Peninsula.   We decide to keep traveling south and see the whole coast rather than heading inland. We spent some time on the river in Hoquiam and visited the coastal port of Westport. We found a large number of cranberry bogs in this area as well as the requisite Ocean Spay processing plant. I thought all my cranberries came from New England. Seems like they grow here in Washington, too.

We continued down to the Long Beach Peninsula, in the southernmost corner of the state, near the Oregon border.  We were staying at Anderson’s on the Ocean RV Park.  This well maintained park was, as advertised, right on the ocean. A short walk over the dunes let us enjoy some of the 28-miles of beach on the peninsula (it is billed as the world’s longest beach.)  The town of Long Beach was a fun, kitschy place. It was also busy and vibrant, unlike many of these older resort areas that have seen better days. 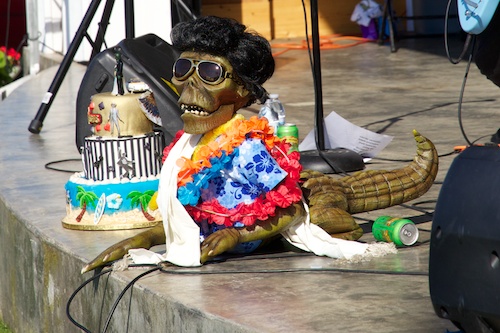 Elvis, or, an interpretation of him

They have a number of weekend festivals to lure the visitors. I would have liked to been there for the kite festival, but we wound up with the celebration of Jake’s 75th birthday. Jake is this rubber figure with the head of a man and the body of an alligator, a local icon I gather. They used the event to have 5 bands, an antique car show, games for the kids and raise money for breast cancer. The one band we were there for, the Graceland Five, did all Elvis covers, with a Punk beat and an Elvis impersonator who could also make it as a stand up comic. They were unexpectedly entertaining.

The other side of the Peninsula is on Wilapa bay, home to well-known oysters of the same name.  We spent some time at Oysterville Sea Farms, on the Bay in Oysterville, that sells the Oysters, as well as chowder and many other yummy things.  We enjoyed the view, the building and some of the oysters, but it was cool and very windy, so we didn’t stay long. The weather was typical shore weather. Cool, breezy, lots of fog and some sun.

It is on the list of National Historic Places

A nice place to sit and enjoy some chowder, or wine, or both

We ran out of time. We had made a reservation on a lake inland, so Hubby could get his fishing fix. We never got to explore Astoria, a neat old town on the mouth of the Columbia River, and there was the Lewis & Clark museum that we missed, as well as a few other places.  It is always a trade off, making reservations to ensure you have a place to stay (more important in August, a busy vacation month) and having the time to stay put if you find a place with alot to offer. Sometimes we can shift dates around, in this case we couldn’t, so it was time to move on. Mayfield Lake, or bust. We did make a day trip down to the north Oregon coast, more on that in the next post.

No shortage of fresh fish…halibut and black cod